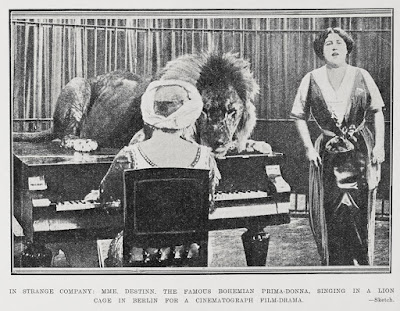 Above: Image of famous Czech Soprano Emmy Destinn with Hercules the lion and an unnamed lady lion trainer from Hagenbeck’s Zoo. Destinn sang the Aria Kennst du das Land (Score by Beethoven) from ‘Mignon’ Composed by Ambroise Thomas. For the Selig Production () “The Lion’s Bride”. The image was taken in November of 1913 with the film released in 1914.

In 1913 famous soprano Emmy Destinn[1] stepped into a cage of 10 lions[2] which was reduced to just four being one male and four females)[3] for the Selig Polyscope Company’s film production “The Lion’s Bride”[4]. Destinn sang the aria “Kennst du das land?”[5] from Act 1 of the Ambroise Thomas’[6] opera “Mignon”[7]. It was reported Destinn was paid over £2,500, and was insured for £25,000 against death or injury while in the cage with a lion.[8] 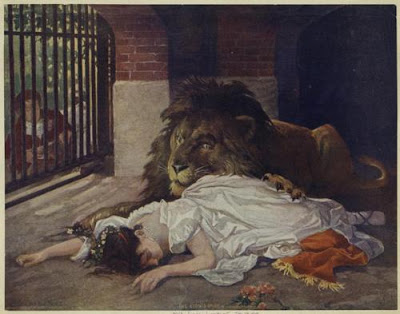 A sypnosis of the film is as follows:

“This Selig production was inspired by a famous painting of the era, also titled ~The Lion's Bride. Although she loves another, the daughter of an evil baron has been promised in marriage to an ancient count. With the help of the count's jester, the girl and her lover are able to elope. Interrupting the wedding, the count grabs the heroine and tosses her into a den of lions, where she presumably ends up as the "blue plate special." Her vengeful lover then kills the count, as the extras react in horror, and the canvas scenery flaps in the wind. The original The Lion's Bride was also the source for a key scene in Cecil B. DeMille's Male and Female (1919).”


The scene was shot on location at the suburb of Neu Babelsberg [12]  in around circa November of 1913. Destinn was required to enter an enclosure containing ten lions, which had been supplied by Carl Hagenbeck’s Zoo for the purpose. Also in attendance was an un-named ‘lady lion tamer’ and a man described as ‘small and wirey’ who were also both from Hagenbeck’s. According to one report an audience of 100 people were in attendance to witness the scene that unfolded.

According to Destinn in an interview after the event the lions in the enclosure had become unsettled when she had begun to sing, accompanied by the music of Beethoven’s[13] score[14] to the aria[15] “Kennst du das land(?)”:


At any rate, Hagenbeck's lions, lent for the purposes of a film recording Madame Destinn's acting, declined to-day to be soothed by the world-famous voice. A great crowd gathered to see Madame Destinn in the lions' den, but the beautiful aria which the film supposes her to sing, Beethovens "Kennst du das Land," was performed at a very respectful distance by the gramophone, and Madam, Destinn was promptly reminded of many inaccurate quotations of Congreve's verse when, as soon as she began to sing, the lions began to growl I noticed," said Madame Destinn, "that as soon as I began to emphasise the notes my lion started to growl. You can guess that I cut it out quickly."[16]


It was required by the producers of the film[17], that one of the lions should be induced to lie on top of the grand piano, that had been placed in the enclosure for that purpose. In due course, one of the male lions named ‘Hercules’, was induced to climb on top of the instrument where he lay down, with forepaws hanging over the keyboard. The lady lion trainer,, had then sat down at the piano, in order to ensure the lion did not attack Destinn.


A lady tamer sat down on the piano stool, obviously for the first time in her life, to act the role of accompanist, and incidently to keep an eye on the sleeping monarch, while a wiry little man from Hagenbeck's, who treated the lions just as if they had been so many rabbits or guinea-pigs, was very much on the alert, just out of the line of fire of the battery of cameras that were turned on the centre of the cage. These preparations completed, Madame Destinn stepped into the cage quite unconcernedly, and, hardly casting a glance at the animals, took up her station within two or three feet of the lion on the top of the piano. Then the signal was given, the films began to rattle, and the great singer opened her lips.[18]


After the performance Destinn was then induced (somewhat unwillingly), to place an arm around Hercules’ neck, and pose for the photographers. Destinn walked away from her difficult scene without any incident.


“..The song at an end, the prima donna bowed her acknowledgments to the imaginary audience for its imaginary plaudits, and now came the one feature in the performance, (says The Daily Telegraph) which appeared to arouse in her a certain amount of misgiving, for she was asked to lay her arm around Hercules's neck. Whether it was difference at the idea of taking such liberties with the king of beasts, or the thought that the maxim about sleeping dogs might apply with at least equal force to other and larger animals, at any rate, she executed the prescribed embrace with obvious signs of reluctance, and her land rested only  with the gentlest possible pressure on the tawny mane. It was probably concern for the good fame of his pets which made the man from Hagenbeck's step forward and take hold of the singer's arm and, at the same time assuring her that she had no ground for uneasiness, lay it firmly right round the lion's neck…”[19]


[1] Emmy Destinn was born at in 1878, the daughter of Emanuel Kittel. She studied under Madame Loewe Destinn, whose name she took. She made her debut at the Royal Opera House, , in 1898. Her best-known parts were Senta, Mignon, and Carmen. Destinn during the height of her years had sung with Enrico Caruso and other famous opera greats. Destinn died on aged 52 years from a stroke. (sourced Wikipedia)

[2] Hawera & Normanby Star reported six males and four females as being in the group of lions supplied by Hagenbeck.

“In order not to overcrowd the scene six of the animals were temporarily banished into their travelling van, whence they surveyed the proceedings with indulgent patience.”

[6] Charles Louis Ambroise Thomas (, – , ) was a French composer, best known for his operas Mignon (1866) and Hamlet (1868, after Shakespeare) and as Director of the Conservatoire de Paris from 1871 till his death. (sourced Wikipedia)

[7] Mignon: An Opera by Ambroise Thomas.
The story of "Mignon" is derived from Goethe’s "Wilhelm Meister." It is founded on that favourite operatic subject (used in "The Bohemian Girl" and elsewhere) of the abduction of a high-born young lady and her sojourn with the gipsy tribe.
(Sourced Music with Ease website  http://www.musicwithease.com/thomas-mignon.html)

[10]  The painting the Lion’s Bride (1908) by Gabriel Cornelius Ritter von Max,  depicts a woman lying on her stomach dressed in a white gown with a male lion over her with the forepaws on her dead form. The painting also inspired a Cecil B. de Mille silent 1919 film “Male and Female” starring Gloria Swanson. Swanson posed with an adult male lion in costume in a similar pose as depicted in the original composition.

[12] Babelsberg is the largest district of the capital in . The affluent neighbourhood named after a small hill on the river is famous for and Park, part of the Palaces and and Berlin UNESCO World Heritage Site, as well as for Studio Babelsberg, a historical centre of the German film industry.

[13] Ludwig van Beethoven baptized – ) was a German composer and pianist. A crucial figure in the transition between the Classical and Romantic eras in Western art music, he remains one of the most famous and influential of all composers.

[14] Score is a common alternative (and more generic) term for sheet music, and there are several types of scores, as discussed below. (Note: the term score can also refer to incidental music written for a play, television programme, or film.)

[15]  An aria (Italian for air; plural: arie or arias in common usage) in music was originally any expressive melody, usually, but not always, performed by a singer. The term is now used almost exclusively to describe a self-contained piece for one voice usually with orchestral accompaniment. Perhaps the most common context for arias is opera, although there are many arias that form movements of oratorios and cantatas. Composers also wrote concert arias, which are not part of any larger work, such as "Ah perfido" by Beethoven, and a number of concert arias by Mozart, such as "Conservati fedele".

[17]  Selig Polyscope Company (defunct) was based in California USA