The Life and Death of Dumbo - Australia's First African Elephant 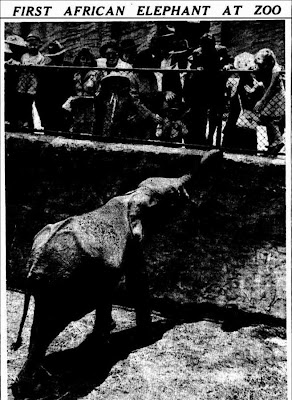 FIRST AFRICAN ELEPHANT AT ZOO
The first African elephant ever to be shown in Australia was on view at Taronga Park Zoological Gardens yesterday. It is a six-year-old, and is not yet five feet high. The elephant arrived last week. Most of the animals and birds which arrived in the same ship arc still in quarantine.

-Sydney Morning Herald 13 January 1947
In 1946, several members of the Taronga Park Trust, from Sydney, Australia, spent several months travelling around the African Continent in search of new animals to stock their growing collection.

During a visit to the Belgian Congo in 1946 (now The Democratic Republic of Congo) the men came across the only elephant training school in Africa. They purchased a 6 year old as yet unnamed African Bush elephant (Loxodonta africana) from the school - 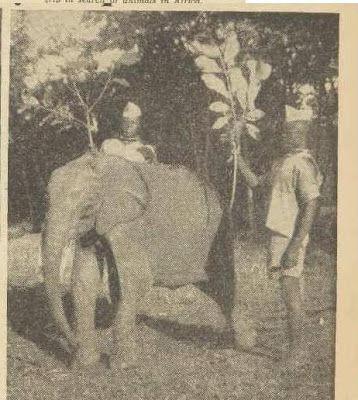 The elephant was bought from a special elephant training farm in the Belgian Congo. Run by the Belgian Government, it is the only one of its kind in Africa. Each February officials, with about 60 native boys, go out to catch young elephants.
They take with them a number of trained monitor or mother elephants, who are turned loose among the young ones and head them off for catching.

Taken back to the farm, the babies undergo a rigorous six months' course of education.

They lead a strictly regimented day-morning bath in the river, lessons, a period out at pasture, and another bath at night.
During this time they learn to lie down and rise at word of command and to know the human voice.

The monitors stay with them throughout training, assist backward babies who either won't lie down or get up by applying their trunks and tusks.

The motherly monitors think nothing of bringing a troublesome kindergartener to heel with a good firm slap from their trunks, Mr Brown says.

Each night the tethered elephant lines are visited by an old hippopotamus who comes up from the river, inspects the babies, and everything to his satisfaction, goes back as silently as he came.

RARE ANIMALS ON SHIP FOR SYDNEY ZOO
MELBOURNE, Mon. - The Swedish vessel Mangarella which arrived in Melbourne today assumed the character of a modern Noah's Ark after calling at Mombassa, East Africa, on the voyage from Gothenburg. The vessel called at the African port to load a valuable cargo of animals, birds and reptiles for the Taronga Park zoo, Sydney.
The collection of wild life ranged from finches to a seven-year-old African elephant, the first of its kind to be brought to Australia.

With the arrival of so many species all at the once the zoo found itself short of cages and space and thus had resorted to cutting the enclosures down in size to accommodate the new arrivals. And with it the Sydney Morning Herald was pleased to announce

The young elephant that has just arrived is the first one the Zoo has had from Africa - but it will be no time before you will be able to ride him. He is only seven years old, and an elephant takes 15 years to grow up

Named for the cartoon Walt Disney movie character, 'Dumbo' as he was now named spent a very short life being one of the main attractions at the Taronga Park Zoo. However by late June/early July of 1947 the young elephant was showing signs of illness. On 14 July 1947 Dumbo the African Bush Elephant died he was around 7 years old at the time

A Belgian Congo ' baby elephant, which was at Taronga Park, died today after an illness lasting some weeks. It is one of the most difficult animals to rear in captivity and, had it lived, it would have been the first animal of its kind to have lived in captivity anywhere in the world.

- Canberra Times 14 July 1947
A post mortem would later show the elephant had died of an undisclosed congenital illness.

Dead elephant could not have lived long

SYDNEY, Tues:
Dumbo, the Taronga Park Zoo elephant, worth £1,000, which died on Sunday, was internally deformed, which meant that he could not have lived long. This was discovered at a post-mortem examination today.

It was explained that Dumbo had not been insured because the rate of loss among animals was low.