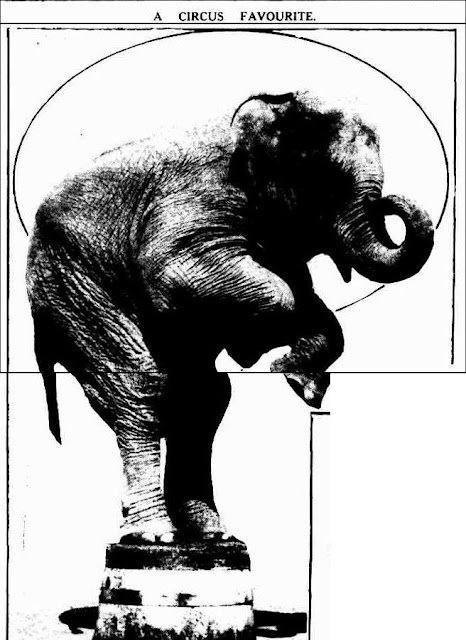 In 1887 a new attraction was added to Moore Park in Sydney with acquisition of a young performing elephant from W. H Hartley.

The society has acquired by purchase Mr. W. H. Hartley's performing female elephant " Toby," which has already become a general favourite with the public;

Sydney Morning Herald 1 October 1887
The attractions at the Zoological Society's Gardens, Moore Park, now include a young performing elephant named Toby, who goes through a number of clever revolutions daily. In addition to signifying his approver or otherwise of various matters submitted to him, ho removes his keeper's hat when called upon to do so, rings a hand- bell, and practices upon a " see-saw." Toby is also sufficiently expert to play several tricks upon his caretaker Mr. J. Burrows.
- Sydney Morning Herald 6 August 1887
Toby had proved to be popular. J Burrows (possibly later 'Captain Burrows' of Wirth's Circus fame) was the elephant's keeper at the time. Like Jessie, Toby was expected to give rides to the children who visited the zoological gardens, as well as performing on command the tricks required to draw in the visitors.

...but the great attraction, for the juveniles especially, was the elephant. Jumbo, as usual, satisfactorily performed his part in catering for his youthful patrons, while Toby appeared in a new character as a performer, and her tricks would have solicited applause from the audience of a first class circus......

The Zoological Gardens will be open The elephant-keeper will put Jessie and Toby through their performances.

Sydney Morning Herald 9 April 1898
For over a decade Toby seems to be performing her duties well, however by 1904, it appears that Toby was considered perhaps of dubious temperament, and had been sold to Wirth's Circus. The concocted story that was later reported about her in the Australian newspapers, perhaps was designed to impress the newspaper reporters and wow the audience. She made her first appearance in Wellington New Zealand during March of 1904.

"Toby," the big baby elephant arrived from Sydney, this week, made her first appearance with the circus company last evening, and proved that she was intelligent and clever us well as ponderous….

The business done by the Wirth brothers with their circus during the first week of their season in Wellington was so good that they decided to put in smother week, which closes tomorrow. Big business has continued right up to the finish. The co. gained additional weight this week by the arrival of a five-ton elephant, which came by the Sydney boat as cargo

Otago Witness 23 March 1904
Wirth Circus toured New Zealand from February to April 1904 before returning to Sydney. As mentioned earlier the story Wirth's soon concocted for Toby has no credence. As with many circuses an elaborate story was always created to impress. 'Captain Burrows' was most likely the same Mr Burrows that had taken care of Toby at Moore Park. Toby of course had been purchased in 1887 from W. H. Hartley by the Zoological Society.

The elephant Toby has an interesting history She was born on the march of General Roberts relief expedition to Candia in the year 1877 and Captain Burrows who has long had her in his special charge and who was then a captain in the commissary department book care of the infant and brought her safe to Candia and back, and when he took his discharge from the British army he brought her to the Sydney Zoological Gardens, and she was there purchased by the Wirth Brothers and Captain Burrows was specially engaged to travel with her in fact he has been her only trainer, and she submits to no one else. Toby is the largest performing elephant in the world. She weighs four tons, and performs tricks which no other elephant has over accomplished She is of the Muktah breed which the natives claim as the Devil Elephant which they are afraid to molest, but under careful training she has displayed wonderful docilitv and intelligence Her training has been whollv done by signs and words of encouragement, and without any of the cruel coercion to which elephants are sometimes subjected Toby made her first Australasian appearance at Wellington New Zealand and is now on her way back to the mainland to win further fame for her wonderful capabilities, and for her skilful trainer

The Mercury 10 May 1904
By July Toby was out causing trouble. She broke loose from her chains and went on a minor rampage around the grounds where Wirth's Circus were located for a performance.

Toby, the educated elephant of Wirth Bros.' circus, broke loose from his fastenings at the Carrington Grounds at an early hour on Monday morning. He broke up the drop scene, its pole, the curtain, and the proscenium of the theatrical stage in the ground, but failed to scare the life out of Mr. Goldsburgh, who slept in a room at the rear of the building, and slumbered during the whole commotion. Toby finally dashed through the fence of the Carrington Grounds, across the right-of-way to the adjacent sleeping quarters of Mr. Groves. Toby pulled down three or four panels of fencing and tramped upon a few trees in the yard surrounding the building. He made a satisfactory meal of a bag of wheat and.half a dozen stale loaves of bread before he was sufficiently restored to good temper to enable attendants to guide him back to safe keeping.

Kalgoorlie Western Argus 26 July 1904
She is reported again in 1905 performing with two other elephant 'Jumbo' and 'Ghunah Sah' with their trainer Captain Burrows in charge. By now it appears Wirth's had in their care at least three elephants. Ghunah Sah as far as I can ascertain was the first Wirth's had obtained.

The control of the elephants, Gunnah Sah, Toby, and Jumbo were in attractive form the beasts went through various manoeuvres in a way that pleased the audience.

Sydney Morning Herald 17 April 1905
Not much else is see of Toby at Wirths. It appears by 1909 the company had more than three elephants including one they claimed was born in Australia. How much truth there was to that story is at this stage unknown.

Captain Burrows brought out seven elephants at one time, Including Baby Jumbo (the Australian), who stood on his head, and "Alice" (of Wonderland) was there, also "Toby" (formerly of the Sydney Zoo), who is now thoroughly trained.

DEATH OF A CIRCUS ELEPHANT.

A familiar figure of Wirth Bros Ltd's circus ring has disappeared, Toby, the oldest and cleverest elephant of the herd, which died yesterday morning after a two or three days illness. For years she was the principal performer in the elephant's act, and did tricks denoting intelligence almost human. She was about eighty years of age, and was worth nearly £2000 She had a remarkable memory. On one occasion during a steamer voyage an engineer "loaded" an orange with pepper and gave it to her. On a subsequent voyage the same engineer passed near her, and she grabbed him with her trunk, and only the rigging saved the man from going overboard. She died of a similar complaint to the one which caused her collapse on the bridge at Nowra a year ago. On that occasion she held up the horse traffic for about twelve hours.