'A Daring Feat' The Tiger Chariot Act of Wirth's Circus 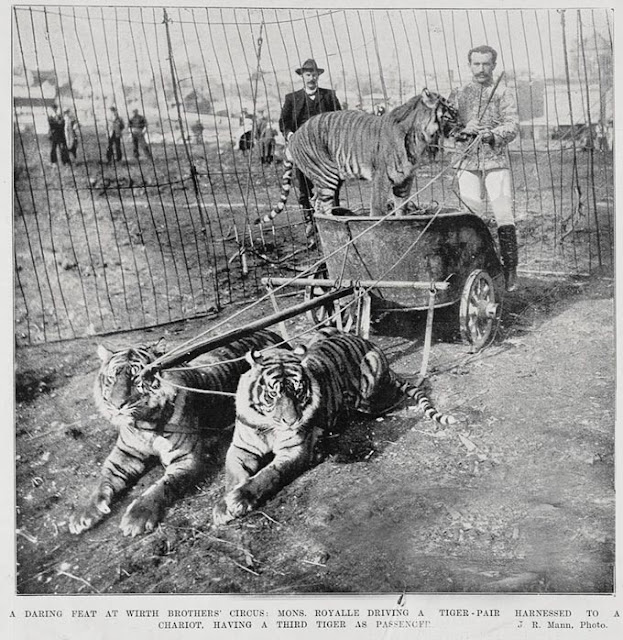 These days with the advent of growing opposition against the use of animals performing in circuses an image like this would be frowned upon. Below is a brief summary I wrote up about the animals in this act.

Prince and Pasha[1] are harnessed to the chariot, with Kitty the Tigress playing the part of ‘Jehu’[2] The trainer was known by the name Monsieur Ragoul[3] or Rogalle in some publications.

The act debuted as a finale on , where Wirth Brother’s Circus and Menagerie were conducting performances at Rockhampton in Queensland Australia.[4] The trainer at the time was referred to as ‘Monsieur Soueki’. The tigers Prince, Pasha and Kitty performed with the two male tigers harnessed to the chariot and Kitty riding in the vehicle.

“…A new act is to be put on to-night as a finale to the programme M. Soueki who has entered the tigers' cage nightly, will show his animals in a sensational act in the centre of the ring. A large wire cage has been erected around the ring and M. Soueki will enter it with the three tigers. After repeating their various tricks, two of the tigers will be attached to a chariot and draw it round the ring, and the third will jump on to the box seat and act as driver…” wrote The Morning Bulletin (28 August 1901).

Philip Wirth later wrote from , to his brother George advising him that the act had been successfully performed at Rockhampton and had gone off ‘with a hitch’.[5]

During the latter part of 1901 the circus traveled extensively through to showcase this spectacular act.

“…Royal tigers, Prince, Pasha, and Kitty, ferocious forest-bred animals that perform on awe-inspiring act. The entire circus arena is enclosed with a steel cage, the tigers are let loose, . Ragoul, their trainer, enters the cage and makes them seesaw, play leapfrog, jump hoops, roll barrels and globes, and finally harnesses two tigers like horses to a chariot, and a third drives them rapidly around the arena..”[6].

In 1902 during the tour, the trainer had some trouble with one of the male tigers, when the animal refused to stand up during a performance in .[7]
The act was performed in tours in the years 1902 and 1904 respectively. No further performances using the tigers in this manner were seen in this country after 1904.

The Act was discontinued around 1906 when the last advertisement of Wirth Circus mentioning the performance appeared in January of that same year.[8] After 1906, no further references are made.

[1]  ‘Pasha’ who was reported in May 1901(Taranaki Herald 16 May 1901) attacking Carl Wirth. Wirth had sat on the tiger during a performance in . The tiger inflicted serious injuries to the trainer’s leg. The animal was apparently to be held for exhibition purposes only. Pasha had 5 previous incidences of attacking his trainer.
[2] Jehu was a 9th century b.c. biblical king of Israel
[3] When, the act was first reported by the Morning Bulletin () the trainer was referred to as .  Soueki
[4] Morning Bulletin
[5] Courier
[6] The Register
[7] Hawera and Normanby Star
[8] Advertisements The West Australian
1901 1906 act Australia chariot George Wirth Kitty New Zealand Pasha Phillip Wirth Prince tigers Wirths Circus