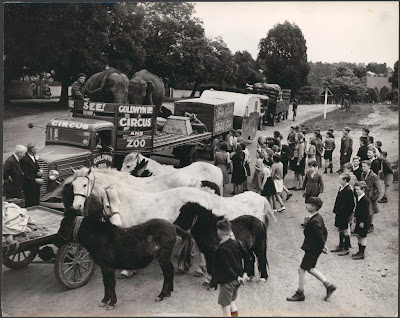 Goldwyn Brothers Circus and Zoo comes to visit the town of Drouin, Victoria, Australia in 1944
Image courtesy of the National Library of Australia Commons

I came across this fascinating image of school children gathering around the horses owned by Goldwyn Brothers Circus and Zoo when they visited the rural town of Drouin, Victoria in 1944. What caught my eye were the two elephants in the background, and possibly although hard to identify is a third.

Some brief research came up with some of the elephant's names. Around this time period Goldwyn Brothers had at least two elephants.

The first name I found was a female elephant named 'Annie'. She was reported in the Horsham Times (26 September 1941) when she had entered a caravan to shelter from a storm. Annie was the first elephant obtained by Goldwyns. She had been sent from London as 'a refugee elephant'  Horsham Times (26 September 1941) What happened to Annie after 1950 is unknown. A second elephant with the same name was imported along with a third in August of 1950 (see next paragraph for further details).

The next is Peggy who arrived sometime between 1942 and 1944 (she was 23 years old in 1951) another female who was reported and photographed in the Sunday Herald (23 December 1951) after a fire had broken out in a railway carriage near Milson's Point. An overhead power line had snapped and had fallen across the train. In this particular report three elephants were mentioned as being present and owned by Goldwyn Brothers. This corresponds to an earlier report from The Courier-Mail (5 August 1950) of the importation of two elephants from what is now Thailand that were two sisters named 'Fanny" and "Annie" at a cost of Cost £3000.

I can only assume that possibly the first two elephants Goldwyn's possessed were 'Annie' and 'Peggy' at some point prior to 1950 Annie may have been sold or passed away. I can't find any reports at this stage of her fate. After 1950 Goldwyn's possessed three elephants Peggy, Annie (the second) and her sister Fanny, since the report from the Sunday Herald (23 December 1951) mentions three elephants, Peggy being one of them. Annie and Fanny had their names changed to 'Topsy" and 'Jennie'. They were reported performing in September of 1950 in the Morning Bulletin (15 September 1950) with Peggy, who played a mouth organ at Rockhampton in Queensland only a month after their arrival from Siam (now Thailand).

Goldwyns also possessed lions, monkeys and horses. One of the horses was named 'Prince the Talking Horse' and it appears for some years this animal was one of the featured acts in Goldwyn Brothers Circus and Zoo.