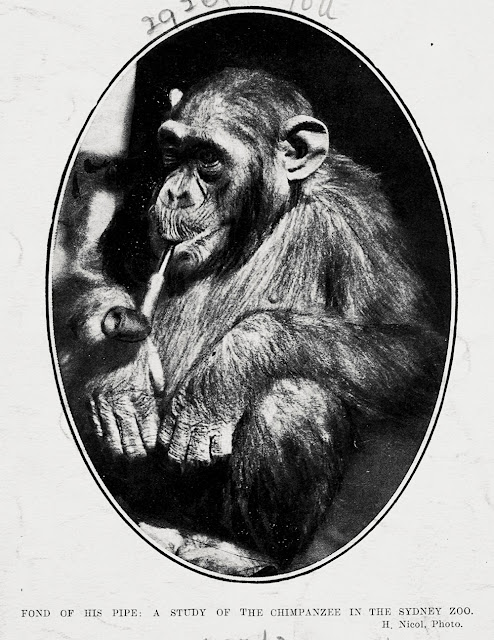 
While I was looking in the Auckland Libraries website Heritage Images on Line, I came across this stuning portrait of a chimpanzee in the old Moore Park Zoo in Sydney, NSW, Australia.  Note the pipe that is in the mouth. I've done a small amount of research so far that indicates this is most likely a female chimpanzee that was imported in 1909. There are advertisements in the Sydney Morning Herald from early 1909 advertising that a chimpanzee was at the zoo. At the same time a male chimpanzee named Casey was being exhibited around Australia by animal trader and dealer Ellis Joseph. Casey did smoke a pipe but it is highly unlikely this is him. Ellis Joseph later provided a second male chimpanzee also named Casey to Moore Park Zoo's successor Taronga Park Zoo in 1920.  Casey the second died in 1936.
1909 1910 Chimpanzee Joseph Ellis Moore Park