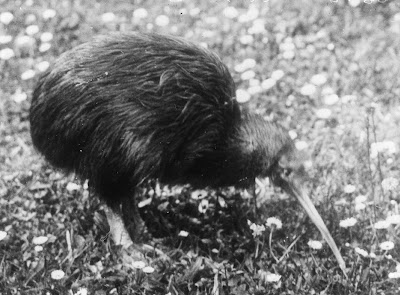 The Auckland Zoo History on their website states the first kiwi was exhibited in 1949. However this image dates from 1923 and is stated as being taken at Auckland Zoo.

I did some investigation into this and checked in 'A Tiger by the Tail - the History of Auckland Zoo 1922-1992' by Derek Wood with Robert Mannion.

....In September (1922), Mayor Gunson accepted a kiwi from a Mr Dryden of Otangiwai, but the gift was to cause some difficulty with the Department of Internal Affairs

An article in the Evening Post (6 September 1922) confirms that permission was given for Auckland Zoo to keep the kiwi concerned. What happened to the bird after 1923 is at this stage unknown. It appears later on that Auckland Zoo did indeed have issues with the New Zealand Government after that year over the keeping of Kiwi at the facility. It wasn't until around 1949 that finally they were allowed to keep Kiwi in captivity on a permanant basis.

Replying to the Hon. G. M. Thomson, the Leader of the Council stated that the Auckland City Council had received permission to keep a kiwi in captivity in the Auckland Zoo.