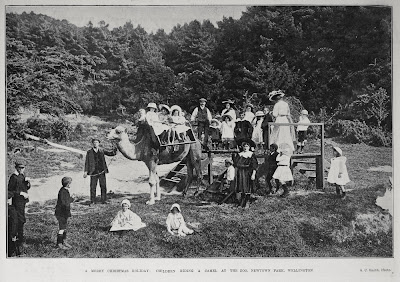 During the early years of Wellington Zoo the need to have added attractions for the Newtown Park became a priority.

It was the actions of Reverend Daniel Bates[1], with the help of the Wellington Zoological Citizens Committee to instigate the purchase of a Dromedary bull camel and equipment from Miramar's Wonderland Park. On 3 December 1908[2] the new camel arrived from Wonderland to begin his new life conveying paying visitors to Newtown Park a ride around the still developing zoological gardens.

The animal had its origins in the interior regions of South Australia. Along with four others, the male camel had made its way on a 950 mile journey to Port Augusta with their two Aboriginal attendants Sandy and Jack[3]. The Three adults and two young calves were loaded on board the s.s. Wimmerra arriving in Lyttleton on 19 October 1906.[4]

Imported for the Wonderland enterprise that was on display at the Christchurch Exhibition members of the New Zealand public were able to take in the sight of three adult camels, two with calves at foot giving adults and children rides.

Housing for the animal was built during December of 1908, with a fee set for patrons who desired a ride on Newtown Park’s wonderous new camel.

“It is intended to let the camel out for rides, 3d a time for children under fifteen years, and 6d for their elders. It is expected that the beast of burden will not only pay for his maintenance, but help to meet the bill for a Bactrian (two humped) brother which Mr. Bertleson  desires to import. At present the camel is lodged in a little enclosure up the slope, to the right, from the lion's cage.”[5]

For the next six years, the camel faithfully carried zoo visitors around the Zoological Gardens until his death in early August 1914. The remains were sent to what is now Victoria University for their Zoological Museum. The bones of the camel may still be in their collection to this day.[6] 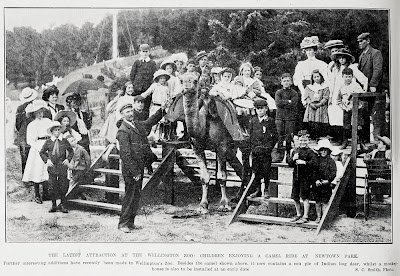