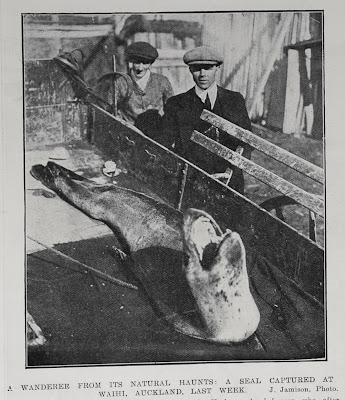 An indepth discussion on the  former Royal Oak Zoo owned by John J. Boyd a couple of days ago with my very close friend Lisa author of the outstanding heritage blog Timespanner led to this blog post.

With Papers Past now having the Auckland Star on line up to 1926, further information on the old Boyd Zoo had come to light, which has enabled Lisa to update her 2008 publication The Zoo War. While we were discussing the new information, Lisa mentioned she had found an article about a seal being exhibited in a deceased state at Boyd's Onehunga based Zoo. By chance while I was in the Heritage Images On Line website I found the image of the unfortunate animal concerned.

The story began on 6 August 1913, when an adult Leopard Seal was found washed up on Waihi Beach. A brief report appeared in the Auckland Star (6 August 1913)


"A seal about 8ft long was picked up on the Waihi beach this morning, and brought into Waihi. It is alive."


Local farmer Harley braved the Leopard Seal's dangerous jaws and managed to put a sack over the animal's head. Naturally it caused a stir in the local community. People came to view the 'monster' tied by ropes on the back of a vehicle. Photographer J. Jamieson captured the moment on camera, the image appearing in the Auckland Weekly News on 14 August 1913. The Thames Star (7 August 1913) reported the animal's subsequent capture with the slight air of the sensational


Our Waihi "special' writes under yesterday's date: 'Quite a sensation was caused in the town to-day, on the arrival of Mr Harley's, jr., waggon, from the Waihi Beach; showing out of the waggon was a large seal, over six feet in length.

The monster of the deep tied on the sides of it the waggon. by means of a rope, and as the public gathered round it would rear up and snap its huge, jaws in defiance. Hundreds of people viewed it during the day.

The animal eats and drinks quite readily. Mr Harley had some difficulty in capturing' it, it showing fight. The seal is of a grey colour and seems to be quite healthy. At present Mr Harley is in communication with the Zoo authorities.


From the Auckland Weekly News image, however, the seal concerned appears to be in an emaciated state. These animals normally are found in Antarctic and sub-antarctic regions. Rarely are these marine mamals found so far north of their normal natural range. From time to time sick or weakened seals are washed up on the North Island beaches. Being the earlier part of the 20th century such animals were either shot or captured. Rarely were any ever released if caught. Most died as a result of their enforced captivity.

"A Fine Specimen" the Auckland Star (7 August) reported on publication of the news. The seal showed fight, but Harley had won the day in his bid to bag his prize. The seal loaded up on the back of the farmer's trap and taken into town for all to view. The Auckland Star made mention in the same report of the animal possibly being sent to the Auckland Exhibition.


When this suggestion was referred to the Exhibition President (Mr Geo. Elliot) this morning, he told a "Star” reporter that the Inspector of Fisheries (Mr Ayson) had already advised that seals should not be placed in the grounds, as when kept in close confinement they are not specially wholesome.

Mr Elliot added that been made to procure an alligator from , and he did not think it would be wise to add any seals to the collection

It also appeared that Harley was also in communication with 'zoo authorities' as the Auckland Star referred to the unknown person/s. Possibly the 'Zoo Authorities' were John J. Boyd and sons of the Royal Oak Zoological Gardens in Onehunga, Auckland.

With profit in mind, Harley the Waihi farmer, advertised the seal for sale in the Auckland Star (12 August 1913)

The Observer column The Fretful Porcupine (16 August 1913) took a dim view of a Waihi farmer's profiteering ideas. In a scathing editorial it was written : -


There are some things one would rather be without. A farmer, of Waihi, bagged a seal in a sack the other day, and in the naive words of the Herald," the animal is neither a female nor a bull under twelve months old which is to say it is a gentleman seal of more than a year, and he is .at liberty to do what he likes with it.”


The Fisheries' Act, which interprets its title, widely enough to embrace whales and seals and things which are not fish at all, doesn't say anything about liberty to do what you like with seals. On the contrary, it says that anybody who takes any seal and has not a license to do so, shall be liable to a fine not exceeding £100, unless he has the written permission of the Minister.


Apart from that, what is the farmer going to do with it. He cannot make it milk his cows it won't bark at tramps and if kept in close confinement (see "Herald") it is liable to emit an unhealthy odour. As a matter of fact, a seal about the premises is pretty noisome, dead or alive and about the best thing one can do with a seal caught in a bag is to turn it loose on a beach and push it into the spacious Pacific.


Under the old Fisheries Act (repealed) marine mammals did enjoy a certain degree of protection. Givent he time period however and the social attitudes of many such mammals were seen as either pests or something to make a quick profit off. Seal skin coats were still in fashion even in 1913. Something as rare and as strange as a Leopard Seal brought not only curiosity but also a potential profit. These days marine mammals are protected under the Marine Mammals Protection Act 1978 and its subsequent amendents - get caught with a seal in your possession and a day in court is guaranteed along with a fine and a possible prison sentence.

Harley though got his money for the unfortunate seal. He sold it to the Royal Oak Zoo much to owner John J. Boyd's possible advantage. However, during transit on the way to Onehunga the seal soon expired after being put into a box for the journey from Waihi .


Our Waihi correspondent writes that the seal captured on the ; and which was sold to the proprietors of the Onehunga Zoo, died during the journey to .  The seal was put into a large box and expired before was reached.


Having paid good money for one seal Boyd still exhibited the deceased mammal any way. A dead profit in the making.

On August 16 1913 an advert appeared in the Auckland Star


J have purchased the Silver Grey Seal from Waihi, which will be on Exhibition on Sunday at the Royal Oak Zoo.


A macabre spectacle must have greeted the paying visitors. One dead Leopard Seal on show in true P.T. Barnum like style. Boyd got his profit perhaps, and the lions perhaps feasted upon the remains of the Waihi seal.