The First Elephants in Australasia 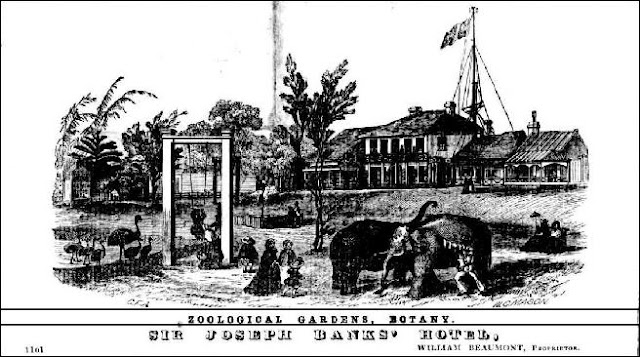 I've been in recent discussions with the great team at The Dictionary of Sydney regarding the first elephants in Australia. Some time back I researched the missing Alice the Elephant of William Anderson's Wonderland City at Tamarama, Bondi, Sydney and found out what had actually happened to her. We discovered of course that she became the famous "Princess Alice" of Wirth's Circus. Princess Alice died in November of 1941. While I was in the Dictionary of Sydney's website (well worth checking out) I came across the above image depicting a scene with two elephants in it. That sparked my curiosity as where these two animals came from. This is a brief overview of what I've found so far to date.

After initial research I found the first importation of elephants into Australia appears to be in late 1851 when a male and female elephant from Dacca, India were shipped from Calcutta on board the ship Golden Saxon. She came into port at Hobart. The male elephant was sold at auction, and was exhibited around various hotels in Hobart before he was shipped to Melbourne, before ending up in Adelaide where he ended up pulling a plow. The elephant was named "Tommy" It appears he died around 1860, however I still have to confirm a definite death date on this animal.

The next elephant, a 22 month old female was shipped into Sydney and became the first elephant to set foot on the Australian continent. She was imported by William Beaumont a timber merchant in Sydney. Beaumont and Waller's Sir Joseph Banks Hotel was set in expansive grounds on the shores of Botany Bay and it was here where one Australasia's first zoos was established. The Australian Museum did have a menagerie (although their timeline states it was Sydney's first zoo) at Hyde Park,Sydney, that included a female Bengal Tiger (the first imported into Australia), an American Brown Bear, Gibbons and other exotics. According to an 1855 report for the years 1853/54 the collection was sold to Beaumont in 1854. The female elephant Beaumont had imported was advertised as being named "Jenny Lind" when Beaumont held a fete at the Zoological Gardens in December of 1851. She was on display at the Zoological gardens for some years.

In June of 1855 it was reported that she had died, however, earlier in the year around January, a 4 year old male elephant was put up for auction in Sydney. Beaumont in one of his many advertisements (May 1855) stated he had a male elephant and female elephant. In June, Bell's Sporting Life reported that the female elephant "Sarah" had died and the body had been handed over to the Australian Museum for preparation for display. It turned out however that the elephant the Australian Museum put on display was male. The two animals in the image are Jenny Lind or Sarah as she was also called, and the 4 year old male elephant. I can't find any importations by Beaumont himself,  I can only ascertain that the four year male put up for auction was the male elephant Beaumont later stated he had in his collection. Jenny Lind however continued on beyond 1855. Her journey covers almost 17 years of different owners. It appears she finally ended up in Hobart 1867, and was on display around various hotels for a few months. She was again sold in early 1868, then in February 1868 was shipped on the Swordfish to Dunedin, New Zealand. She was on exhibition for a short time in the city, before being taking North towards Christchurch. She died at the Waitaki River around March 1868 after she was let loose by her owner. The elephant consumed the poisonous plant Tutu and was dead within two hours. What happened to her body - simply we don't know. I have to yet to definitely confirm that the elephant brought into Hobart was this elephant however,  all indications so far it appears that it is her.

The last elephant I've found was another female imported into Hobart in early 1855. She was also auctioned off and used for exhibitions. It's possible she ended up in a theatre at Geelong, Victoria but I have yet to research further into her movements.