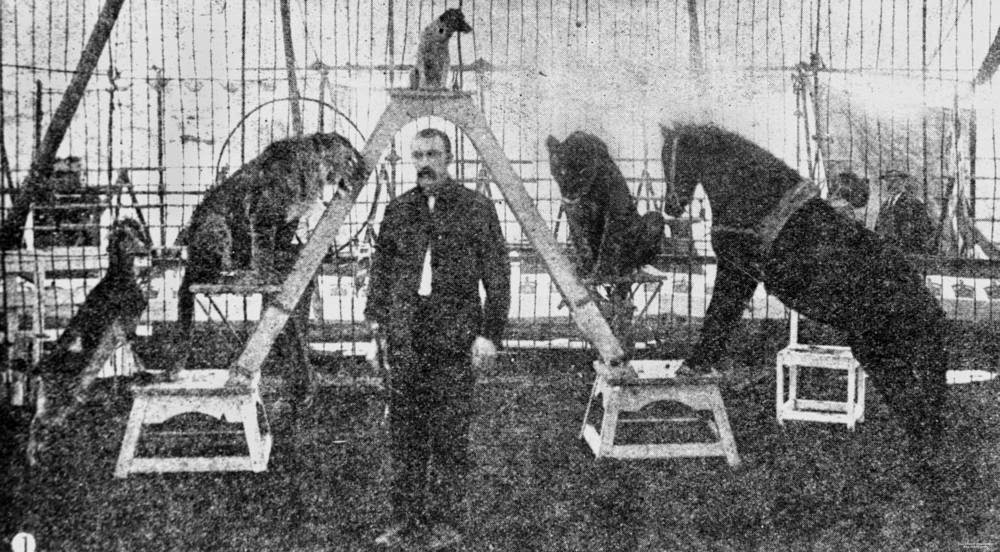 During May 1903, Wirth Brothers Circus introduced a completely new act into their growing range of performances in the ring under the big top. Two young lionesses were purchased from Melbourne Zoo in February 1903, then trained along with a small pony, a dog and a goat to perform as a combination act. The animals made their debut on the evening of May 25th, 1903

Attention is arrested by a thrilling sight in the iron-enclosed ring, in which the wild animals perform. Here it is : A fur boa made of a lively lion hung round a trainer's neck, whilst on a stool close by another lion sits quietly watching a small dog at his feet. It is enough to take away one's breath, and to bring his heart with a jump right into his mouth. These two lions, it seems, are just being trained for public exhibition. They, were obtained from the Melbourne Zoo about four months ago, and when they are ready their turn will not be the least effective nor the safest in the programme.  A pony and a goat are next let into the ring, and a striking tableau is arranged. To get the animals to assume their positions and to remain there needs a great deal of patience and perseverance, but the success of the trainer's efforts are, as will be admitted, really remarkable. The old Scriptural prophecy, "The lion and the lamb shall lie down together," is outdone in the next scene. The whole five animals are induced to recline on the ground, the pony and the lions lying alongside each other, the goat standing on the pony, and the dog 'lying between the pony and one of the lions. Then up again, a somewhat similar tableau is arranged, as is here illustrated. This completes the lesson for the lions, and the tigers have their turn. As they are performing every night, however, they are not troubled much.

I traced the act over several years. By October 1903, one lioness had been removed from the performing group. Wirths also seemed to be using the Bengal tigress "Kitty" in the act in place of the lioness from time to time;  ".....Lovers of the sensational had no cause for complaint, Mons. Ragout went through some daring feats with the tiger ' Kitty ' who had for her companions a dog, pony and goat. His last act of lifting the tiger and carrying it on his shoulders around the cage being amongst the most daring." (Wirth Bros.' Circus. (1903, October 8). Bathurst Free Press and Mining Journal )

What was justly termed something unique in animal training was then exhibited by M. Rogalle with a lion, a pony, a dog, and a goat. The four animals romped together, lay down side by side, sat up with their forefeet on each other (where size and weight allowed), and generally performed things that have to be seen to be believed.

By 1905, the same act continued with a change in the trainer's name.

Mons. Wilde then introduced a great lion, a small pony, an agile goat, and a dog, and this strange animal company jumped hurdles and performed endless clever tricks, and in their friendliness anticipated the time when the lion and the lamb shall lie down together, Perhaps that could be brought about more speedily if Leo could be induced to become a vegetarian.

By 1907, the animals were being trained under "Captain Lindo" and the dog seems to have been dropped from the performance with just three of the four animals remaining.

Captain Lindo with his lion, pony, and goat introduced fresh features all illustrative of the mastery of the human mind over the brute creation.

During December 1907, the act seems to be split up into two different performing groups including two tigers and with yet another name change for the trainer. Wirths though still had the original act alternated with the newer introduced performance routines.

Senor Marco was either in the den of tigers or of lions putting the savage animals through their tricks as calmly as though he were among so many sheep. He had a lion, a tiger, and a goat performing in the one cage, a couple of tigers, a pony, and a dog in another. He carried a lion weighing 3 cwt. on his shoulders and put his head into the mouth of another, feats that made many people shudder to look at.

In late 1908, a kangaroo joined the performing group. It was killed in September 1909, by the lion when the animals were being returned to their cages.

In another act a lion, kangaroo, goat, dog, and pony were in the ring together with the trainer, and the king of the forest proved as docile and obedient as either of his companions.

Last night a sensation was caused at Wirth's circus, Kilmore. The lion, goat, dog, and kangaroo, after the Performance were in the  same cage, and were being drafted as usual into their own cages, when the lion attacked the kangaroo and killed it.

By December 1909, the kangaroo had been replaced and a number of acts combined into a larger spectacular with the original performance routine and animals phased out.

Then came the most sensational part of the programme. M.Marco introduced his group of performing lions, bear, leopards, dogs. Bengal tigers, a kangaroo, and a goat. The performance was a marvellous one. The incongruity of a ferocious looking king of beasts, a physically spare marsupial, a goat, and a grizzly bear being in a large iron cage together appealed to students of animal history, but they all seemed to be on friendly terms, even though the growl of the lion sometimes alarmed the children with a sense of impending danger. The animals were obedient to every touch of M. Marco, and they went through a number of evolutions well. It was a thrilling performance,…